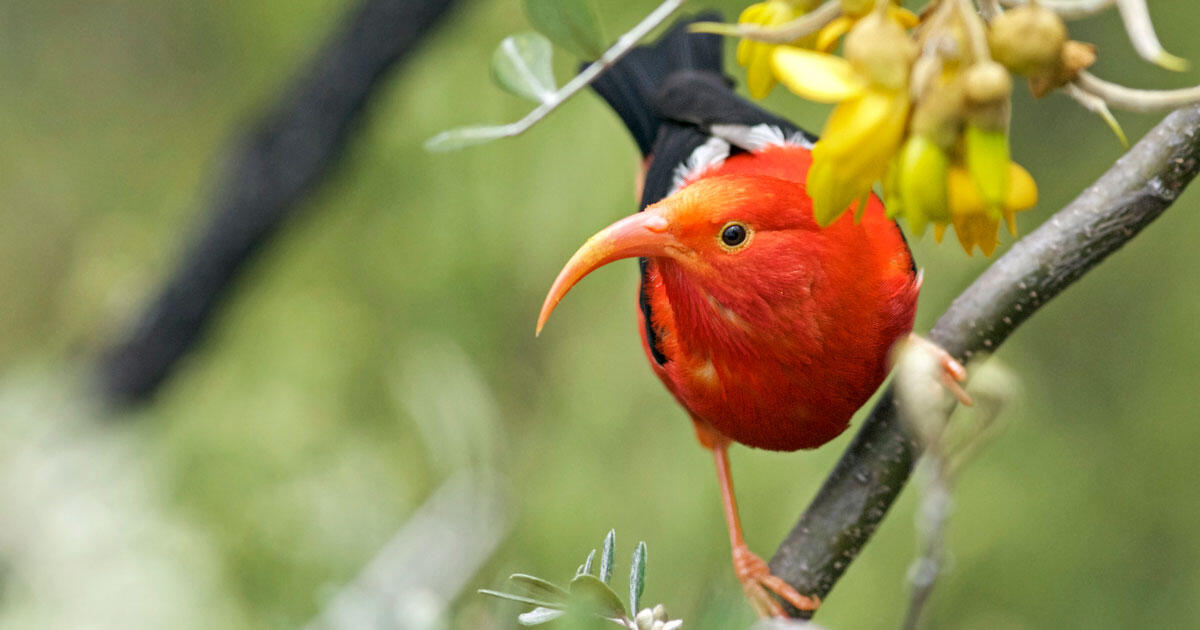 This Asian American and Pacific Islander Heritage Month, I have been thinking about birds of the Hawaiian Islands. As an Asian-American scientist who has worked with birds in Hawaiʻi and in the U.S., I noticed a distinct reverence for indigenous culture even in scientific contexts in Hawaiʻi. Birds in Hawaiʻi have long-held cultural significance and are tied to ancient legends and folklore. Many bird species even retain their Hawaiian names in the official American Birding Association (ABA) checklist, and Hawaiʻi remains one of the top destinations for birders, scientists, and ecotourists in the world.

Sadly, Hawaiʻi is also dubbed the extinction capital of the world, and at least 32 species of birds have gone extinct since 1778. While many of these species disappeared since humans have arrived on the islands due to non-native predators, habitat loss, and invasive plants, we now understand that human-caused climate change is a major threat facing the islands’ birds and people.

The ‘elepaio is an unbelievable bird that is not shy and, yes, practically followed me around the forest croaking its cute ‘elepaio, ‘elepaio call. This old-world flycatcher lives in ʻōhiʻa forests (Metrosideros polymorpha, the dominant native tree of Hawaiʻi). According to Hawaiian lore, it would follow kālai wa‘a (canoe builders) around the forest, and if the insectivore picked at the tree trunk, it was likely rotten and not sound for canoes. The bright orange ʻiʻiwi is another iconic bird of the ʻōhiʻa forest. According to legend, ancient people could hear the sweet melodies of the ʻiʻiwi singing, but the only one who could see it was the demi-god Maui, who had clear vision. Maui painted the ʻiʻiwi by hand, giving it a color that is as joyful to the eyes as its song is to the ears, and decided to unveil the beauty of the birds so all people could see it.

These and several other endemic birds are threatened by climate change. The ʻiʻiwi is particularly susceptible to the mosquito-spread avian malaria. Inadvertently brought in by humans, mosquitoes are moving up in elevation to the remaining native forests as the climate warms, threatening forest birds in the remaining tracts of intact native forest.

The Laysan Albatross has captivated native Hawaiians for eons, and is epitomized by the famous 66-year-old female Wisdom, the oldest known bird in the world. Known as mōlī, its feathers were “more important because (the birds) fly higher in the sky and were closer to the gods”. Both Laysan and Black-footed Albatrosses are imminently threatened by sea level rise, as more than 95 percent of their populations nest in atolls in the Northwestern Hawaiian Islands. These nesting grounds have a maximum elevation of just a few meters. Flooding due to sea-level rise will become more rampant with climate change, wreaking havoc on these slow-breeding, ground-nesting birds. Scientists have tried to get ahead of this problem by translocating them to predator-free areas on higher ground. However, this may not be enough, and additional efforts to mitigate the amount of change happening globally would be a necessary step to help these Hawaiian birds.

Acting to mitigate the effects of climate change is important because, in addition to exacerbating threats facing native Hawaiian birds, climate-related storm surges has also caused damage to low-lying Hawaiian cities and is likely to in the future. And there are still hundreds of vulnerable species across North America that we can protect if we reduce our carbon emissions.

Hawaiʻi remains one of the most sober examples of the permanent losses we face due to humankind’s environmental carelessness. However, if we remain determined and thoughtful in addressing our changing climate, we can aid in the survival and protection of some of the world’s most unique birds, which have captivated hearts and imaginations since humans first arrived on Hawaiʻi. We know what causes climate change, and we know how it threatens birds and people alike. What we need is swift and steady action from our political leaders, thousands of miles away from these islands. One of the most powerful things we can do is reach out to your representatives to voice your support for clean energy solutions. Together we can create a better tomorrow for these ancient spirits that have inspired us for millennia.

‘My land is now owned by lions’: Maasai Mara farmers offer Kenya’s wildlife a lifeline
The Bird World Is Grappling With Its Own Confederate Relic: McCown’s Longspur
Petition: Great News! Dutch Parliament Votes to Close Mink Farms
The Moving Forward Act is an Opportunity to Rebuild Better
Stray Cat Comes to Family Just in Time so Her Kittens Can Live Best Life