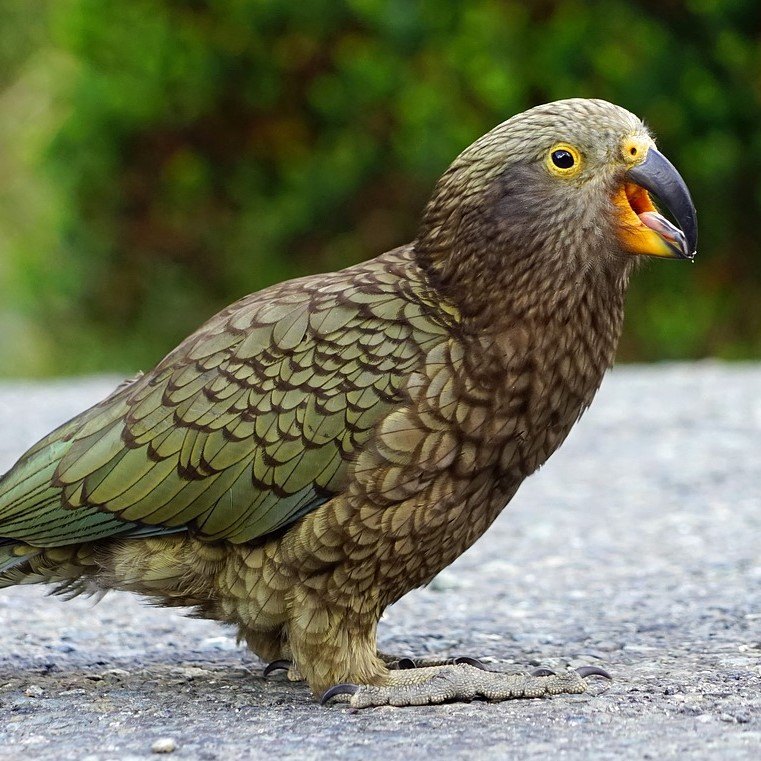 When we think of parrots foraging for food in wild, we imagine them flying or walking about to feast on seeds, buds, seedlings, berries, flower blossoms, and perhaps consuming the occasional insect. What doesn’t usually come to mind is a bird supplementing its diet by feasting on mammals (unless, of course, it is a bird of prey, such as an owl, hawk or eagle). Then again, Kea parrots are unique among parrots in many ways.

Their nickname as the “naughty alpine parrot” is quite telling. The “alpine” part is in reference to the Kea’s native range of the forested and alpine region of New Zealand’s South Island, which makes the Kea the only alpine parrot. The “naughty” part references the Kea’s well-documented explorative nature, that often includes fearless encounters with people. The bird is also referred to as the “clown of the mountains,” and has become its own tourist attraction.

These mostly olive-green parrots with splashes of bright orange feathers under the wings, have long, narrow, curved beaks that seems ideal for picking things apart. Videos and photos abound online that show Keas rummaging through tourists’ backpacks, bags, coolers, shoes, and ski equipment. They also appear to have a penchant for picking apart and stripping off the rubber areas of cars, such as around the windows, and antennas as if cars were chew toys.

Parrots that Prey on Sheep!

The Kea has been part of local lore since the mid-1860s when sheep farmers began inhabiting the area. Stories of farmers finding sheep with wounds on their sides began to emerge. Some told of seeing keas on sheeps’ backs and attacking them. Whether or not Keas were actually attacking sheep was up for debate, that is, until 1992. That’s when Keas’ nocturnal assaults were captured on video. Scientists believe that, some but not all, Kea parrots use their long, curved beaks and claws to tear through the wool and eat fat from a sheep’s back. The kea might be inclined to seek sources of fat to help them survive their cold climate. The bird doesn’t kill the sheep but there is the possibility that the sheep could succumb infection as a result of its injury.

Keas are a protected species, but it is said that they were rarely captured in the wild for the pet trade—they tended to be highly destructive when in captivity.

‘My land is now owned by lions’: Maasai Mara farmers offer Kenya’s wildlife a lifeline
Scotland Bans Seal Hunting and Shooting
Webinar: Boswell’s Journey – An Avian Cancer Survivor Story
Webinar: To Board or Not to Board—What is Best for Your Parrot When you Travel?
Helpful Cat Lets Her Dad Know When He’s Had Enough To Eat