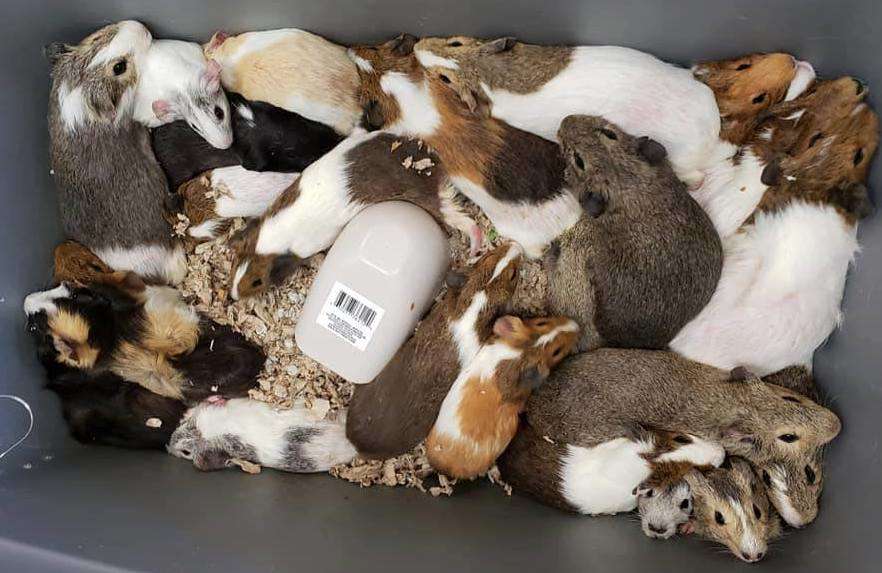 The Davidson County Animal Shelter in Lexington, North Carolina, was already almost full to bursting when a woman walked into the shelter on Monday afternoon holding a box. She told the staff at the shelter she was there to surrender her guinea pigs — but instead of finding just two or three inside the box, everyone was shocked to realize there were actually 35.

The shelter immediately agreed to take them all in, but staffers were overwhelmed as they had no space for them. Apparently, the woman had never meant to end up with so many guinea pigs, and once she realized she couldn’t handle the situation anymore, she went to find help.

“The owner said she had two initially and they just kept multiplying and she could no longer take care of them,” Christina Rodriguez, a veterinary assistant at the Davidson County Animal Shelter, told The Dodo. “According to their owner most of them were around 3 to 4 months old.”

Situations like this one are why it’s so important to always spay and neuter your animals. Many puppies, kittens and other young animals are abandoned because they weren’t planned, and their families panic and toss them aside rather than attempting to seek help. Luckily, the woman did the right thing, and after she left, the shelter staff set about caring for the mass of guinea pigs they suddenly found themselves in charge of.

None of the guinea pigs were in great condition, and many had overgrown nails and some hair loss. The woman had clearly struggled to care for them since there were so many. Other than some minor issues, though, they seemed to be in fairly good health physically, but were definitely very scared to be in the shelter with so many new people trying to help and care for them.

“They were all very scared and hungry, with quite a few of them being underweight,” Rodriguez said.

Once they were all cleaned up and separated so they could feel safe and comfortable, everyone at the shelter went into problem-solving mode to try and figure out how they were going to care for so many guinea pigs when the shelter was already full. They decided to post about their 35 new additions on Facebook — and somehow, within a matter of days, all 35 had either been taken in by a rescue group or adopted into a wonderful new forever home.

When the former owner of all the guinea pigs realized she was in over her head, she found help, and thanks to that decision they’re all happy and safe, enjoying their new lives with people who love them so much.

Reimagining the Tufted Puffin
Woman Orders A ‘Dog Pool’ And Realizes She Should’ve Checked The Size
Petition: Demand Thailand Ban Tiger Captivity and Find Sanctuaries for All Captive Tigers
Dog Is So Chill That She Falls Asleep Every Time She Goes Swimming
Vet Visit Prep: Reducing Stress for Everyone