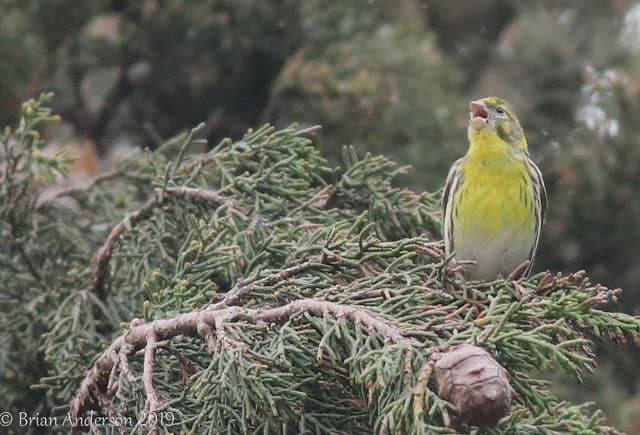 Jim and I travelled down to Littlestone in Kent this morning and before 7am we had found our first target as we pulled up outside the golf course to park and we could hear the European Serin singing it’s heart out.

The singing made it quite easy to pick out the bird as it moved from the pines to the trees across the road and back. It dropped to the floor but quickly returned to the safety of the tree tops. We spent half an hour watching it before moving on to Dunge.

We headed next to Worth and the great wood were a Golden Oriole had been heard. We walked miles and although we heard a couple of fruity notes that may have come from the Oriole they were too few and too short to put a positive ID on it.

We did see a couple of Turtle Doves, Bullfinch and Marsh Harrier to break up the long walk back to the car and then we moved on to Margate where another long walk gave little reward and we can now say we’ve dipped the “plastic” Pied Crow.

On the journey back we stopped at Crossness where Rich B. had found London’s first Great Reed Warbler.

Again a long walk from the Golf Centre and we eventually made the area.

We could hear the Warbler and after a short wait it showed well as it climbed close to the top of the reeds. Getting an image proved challenging as it remained in the reeds.

We picked up a nice first summer Little Gull at the outfall too.

Essex Birder using the blog as a diary of my trips around the country chasing birds. Enjoying the places it takes me and the people I meet along the way. Great to spend time with my Dad and brother as we chase our year lists and grow our life list in the process.

Boaters Rescue Bear With A Plastic Bottle On His Head
‘It’s a success’: Pangolins return to a region where they were once extinct
Helpful Cat Lets Her Dad Know When He’s Had Enough To Eat
Webinar: Boswell’s Journey – An Avian Cancer Survivor Story
Stray Kitten with Fighting Spirit Finds Kindest People to Help Her Thrive