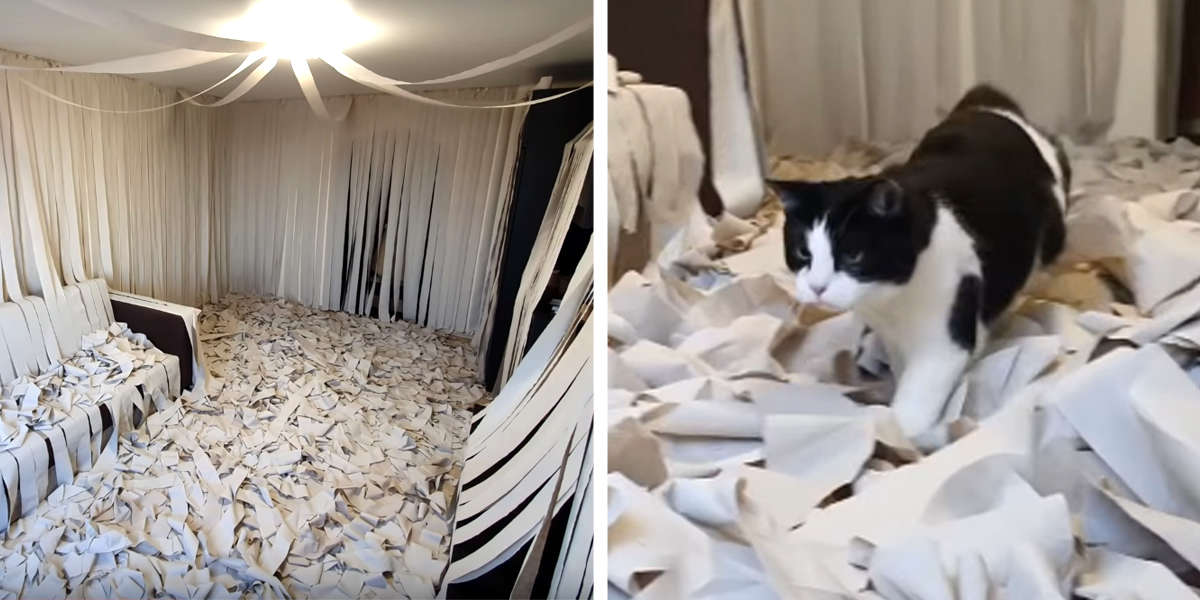 This is Pusic — a sweet kitty who knows you can never have too much of a good thing.

Pusic was rescued as a sick stray kitten from the streets of Belarus four years ago. Not long after, his new family discovered that, like many young cats, Pusic had an uncanny fascination with toilet paper — unrolling it like it a kitty treadmill and relishing in the fluffy pile that resulted.

“When he was small, he liked to play with it,” Vyacheslav, the cat’s dad, told The Dodo. Soon, however, the cat was encouraged toward less messy sources of fun. “Now he plays with toys,” Vyacheslav added.

That said, it’s been a while now since Pusic has had unfettered access to his papery first love. So, as a sweet surprise, Vyacheslav decided to stage an epic reunion of sorts — filling an entire room with TP, all for Pusic’s amusement.

How’d the cat react? Well, he pretty much flipped out. Here’s that moment on video:

“We did not expect such a reaction from him,” Vyacheslav said. “I thought he would just play with them, but something clicked in his head. He was so happy to play with toilet paper, like a memory from his childhood.”

That day, Pusic may have been surrounded by toilet paper. It’s clear from that adorable gesture, though, that he’s always surrounded by love.

After giving his cat a few hours in the toilet paper-filled room, Vyacheslav started in on the clean-up process. But although TP does have, ahem, more practical uses, Vyacheslav plans to save it for Pusic’s enjoyment.

“We try not to waste resources,” he said. “The toilet paper will be useful for future games and for new cat toys.”

For more cute videos of Pusic’s adventures, check out his channel on YouTube.

Climate Change and Birds Near You
Yellowstone grizzly bears being killed to protect Wyoming cows
Webinar: Flight Mechanics & Ethical Concerns
Grisly Report Raises Questions About the Cruise Industry’s Impact on Migrating Birds
Due to Covid-19, the Shelter of the Future May Look a Lot Like Our Homes