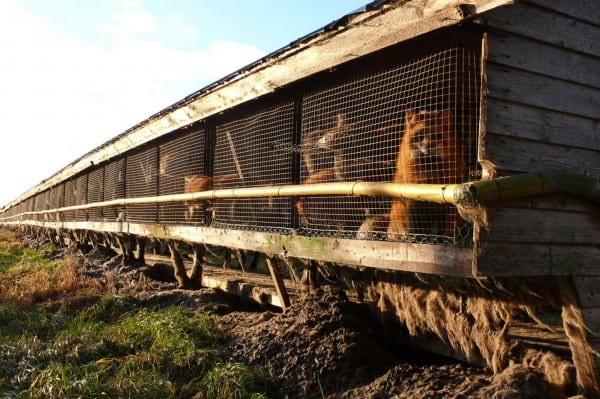 With its noble face and thick glossy fur, this Arctic fox may look appealing. But a glance inside its tiny wire cage reveals it is lying in its own filth. It is held with hundreds of other animals including silver and red foxes. Some have eye infections and others are so obese they can barely move.

And it’s all in the name of fashion. Once animals reach the right size they are electrocuted, their pelts are stripped off and sold to luxury fashion labels for up to £165 each.

Customers include Burberry, Marc Jacobs, Fendi and Gucci. The fur will adorn the shoulders of supermodels such as Cara Delevingne in catwalk shows then end up in the wardrobes of the world’s wealthiest people.

But as fur enjoys a high-fashion comeback, secret film footage from Finnish fur farms reveals the suffering behind the trend. Images and video were captured at three farms supplying pelts to Saga Furs, based near the capital Helsinki.

Offering “the world’s largest assortment of farmed European fur”, its skins are seen in recent films including the Great Gatsby. But the reality is a world away from the luxury portrayed.

In the video, shot in November by an animal rights team, the animals are listless and cramped in tiny cages with fur, excrement and food-pulp em­bedded in the mesh.

One team member, who asked not to be named, said: “The smell is a mixture of pure excrement, urine and the animals themselves. The howling and barking makes it seem a place of horror and no escape.

“When you look into the eyes of the animals you get a feeling of the life behind them. It’s heartbreaking.”

Thomas Pietsch of Four Paws, the animal welfare charity that passed on the footage, said: “The images show fur farms in Finland certified by Saga . They show horrific conditions.

‘The animals don’t have space to move. They have eye infections and some have no tails, which could be a sign of cannibalism. “Foxes are born in a cage, spend seven months there then are killed. This is all they know for their entire lives.”

The Saga Furs website say they operate under “strict standards of quality” and “animal welfare is especially important”. But Mr Pietsch says: “A fox in nature will run as much as 12km a day, which gives an idea of how much these animals suffer.

“The animals always get food as a pulped mix. Basic behavioural needs are ignored because as carnivores, foxes have a strong motivation to bite their food. Here they can only lick. No animal should be kept for fur. It’s a fashion product no one needs and easy to replace.”

Fur has undergone a fashion revival despite a successful campaign in the 1990s led by Peta (People for the Ethical Treatment of Ani­mals) and fronted by supermodels who said “I’d Rather Go Naked Than Wear Fur”.

Saga Furs confirmed a Fendi coat Cara wore in Milan last year was one of theirs. The value of the global fur market in 2011-12 was put at £9 billion, an increase of 44% in 10 years.

A Peta spokesman said: “Killing animals for fur is even more repulsive now than it was then, given that everyone has seen the exposés. Gassing, beating or electrocuting animals and then ripping the skin off their backs will never be in fashion.

“A recent poll found 95% of Britons would never wear real fur, which is why firms like H&M, Zara, Topshop, New Look, All Saints have strict no-fur policies. Selfridges and House of Fraser also refuse to stock fur.”

Saga Furs told the Mirror they operate under Council of Europe recommendations covering “basic requirements for the health and welfare”, which include “adequate freedom of movement, physical comfort and adequate opportunity for grooming, eating, drinking, territorial marking, climbing and swimming”.

It also states “protection against injury, infestation and disease” are requirements . Thomas Pietsch of Four Paws insists these are “very basic requirements that are not being met”.

A Saga spokeswoman said vets had checked one farm identifiable in the video “and everything is as it should be”. She suggested the state of the animals and their cages was because they were moulting or were in a “hospital” section.

She added: “There are blue foxes and Finn raccoons in the footage, animals which the farm in question has not had for ages. The probable conclusion is that the video spread is a mixture of unidentifiable material and therefore strongly misleading.

“We will investigate before coming to any conclusions.”

The Mirror approached Fendi, Alexander McQueen, Marc Jacobs and Gucci, but they did not reply.

A spokeswoman for Burberry said: “Fur accounts for less than 1% of our product offering. As a luxury brand there are occasions where the use of natural hides will be considered important to the design and aesthetics of a product.

“We source natural hides very carefully from suppliers that are governed by high animal welfare standards in line with our ethical trading policy.”

But Four Paws say there is no such thing as ethical fur.

Mr Pietsch said: “I hope people see these pictures and decide not to buy fur. There is no ‘good’ fur farming like some brands claim. If you buy fur it is always cruel.”

We invite you to vote FOR or AGAINST a ban on fur farms in Finland. Please vote and also leave your comments at the bottom of this page.

The editorial content of this article was written by Melissa Thompson for the Daily Record.