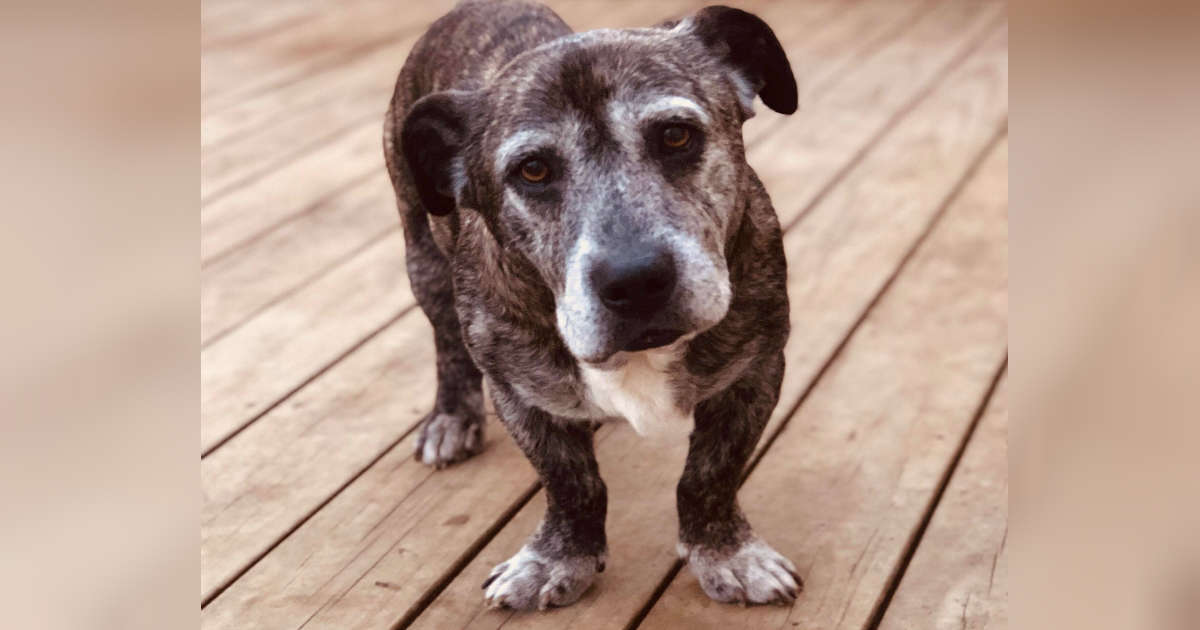 With his short little legs and soulful eyes, Duke is easy to fall in love with. But for all his good looks, the senior bully mix has spent his life bouncing from one home to another.

But people are working hard to make sure his luck’s about to change.

In 2011, when Duke was still a young dog, a deadly earthquake struck Christchurch, New Zealand, where he lived, causing widespread damage. Duke survived the 6.2 shock, but was separated from his original family in the chaos.

“So many people in Christchurch lost their homes,” Abbey van der Plas, founder of Christchurch Bull Breed Rescue, told The Dodo. “There was a big coordination between groups to have earthquake dogs sent to other cities.”

The homeless dog soon found himself in Auckland, at the opposite end of the country. Though he was finally safe, Duke couldn’t seem to hold down a home for more than a few years at a time. Eventually, he wound up in a public shelter, and it seemed like the rootless pup would live out the rest of his years unwanted and alone.

“We are not sure how many homes Duke has been through, but we think at least four while in Auckland, possibly more,” van der Plas said. “No one reported him missing, none of the numbers attached to his chip were responding and no one came forward to claim him.”

Duke’s fortunes changed when van der Plas came across his photo surfing the web, and she hatched a plan.

“His little face broke my heart when I saw his online shelter ad,” van der Plas said. “[I] decided straight away that we had to bring him home to Christchurch and find him the retirement home he deserves.”

Van der Plas coordinated with friends at Chained Dog Rehabilitation & Rehoming, a rescue based in Auckland, to have the brindle dog released and sent from New Zealand’s North Island to the South Island. When Duke finally arrived, van der Plas knew she had done the right thing by bringing him all the way back to where his life started. “Duke has the most amazing personality,” van der Plas said, “And is a really happy, sweet-natured dog.”

“Now that he’s back home he has been super popular and we have lots of great families offering him a retirement home,” van der Plas added.

His pictures don’t do him justice, she said. “He’s a funny wee thing and is even smaller than photos show,” van der Plas explained. “[He] loves to play ball and is very talkative.”

Duke is now recovering from his neutering in a foster home while van der Plas searches for his happily ever after. After so many years of uncertainty, Duke deserves a home to call his own — and an owner who will commit to him for the rest of his life.

If you live in the Christchurch, New Zealand area and are interested in adopting Duke, you can contact Christchurch Bull Breed Rescue. To help other homeless animals in New Zealand, you can make a donation here.

Dog Mom: How I’m Easing My Dog’s Separation Anxiety As I Go Back To Work
The 7 Wild Cats Of Africa You’ve Probably Never Heard Of
Petition: Protect Animals from Convicted Wildlife Murderers
The Bird World Is Grappling With Its Own Confederate Relic: McCown’s Longspur
Stray Kitten Finds Loving Family He Always Wanted After Life on the Street